Parables of eviction and regeneration processes

“A live art project regarding violence, mourning and regeneration processes in México and Central America, from my closest context and personal story to a largest context and historical scale.
I want to create a corpus of poetic works of regeneration symbols in a video film of public performances.

This project extends for me the field of live art to a largest context, exploring regional elements of identity with particular reference to death, mourning and healing processes. Latin America: globalization, symbolism, customs and mechanism of memory and recovery.” 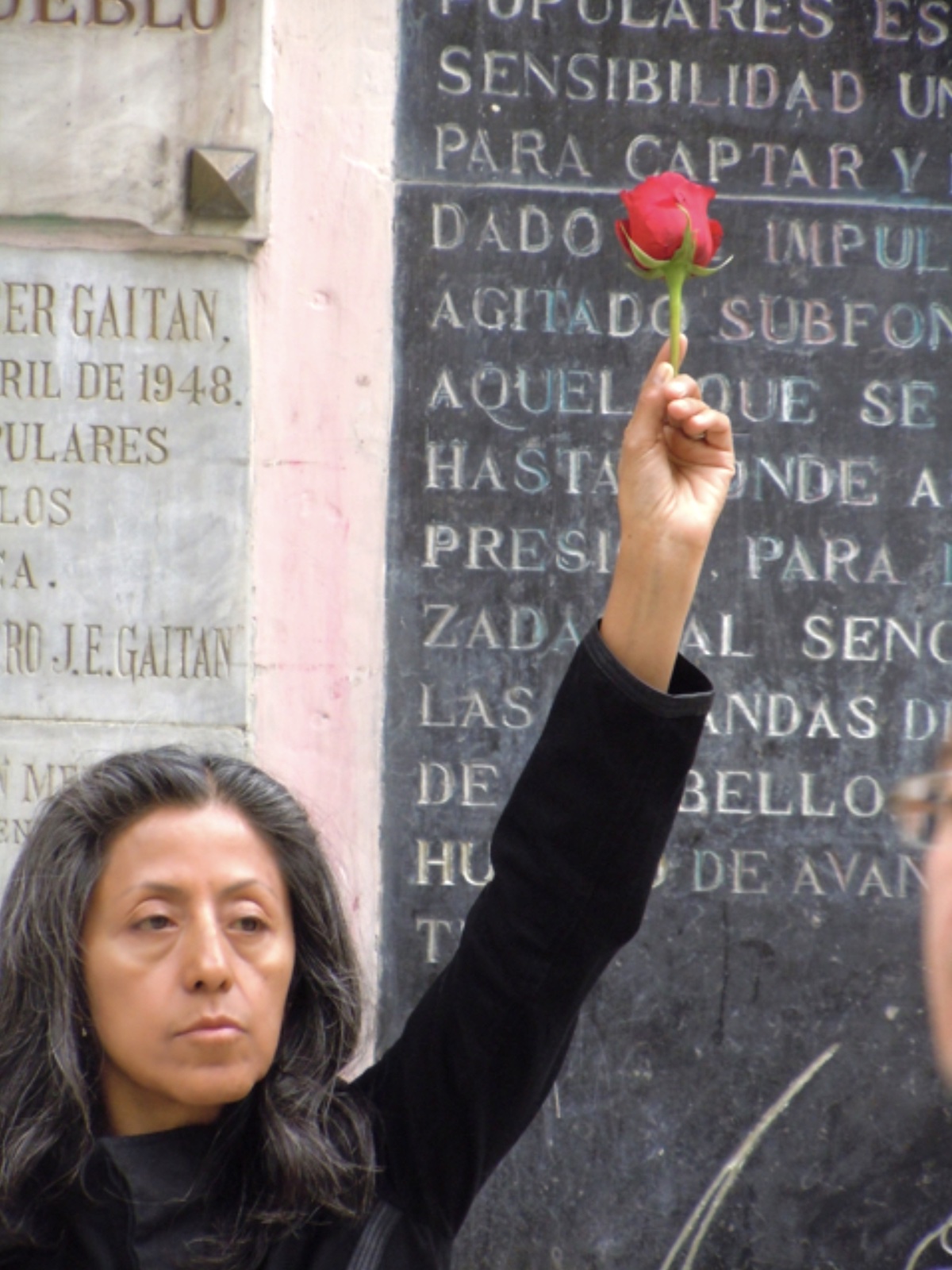 In the project Parables of eviction and regeneration processes, I am interested in exploring and understanding the processes of grief and the every day life after a traumatic event, especially when the lives of beloved ones and fellow citizens have been perpetrated by human violence and lack of justice. Violent deaths are an empty and dark sign of civilization and the very meaning of human existence. These experiences tend to stay, with all its tragic weight, between direct mourners, almost like guilt. Individuals tend to internalize this shade of denial of existence in favor of a society that has the dimensions of human deformity.

Only societies and individuals who recognize their community ties can empathize actively promoting resistance against the abuse of power and the recovery of the families of the victims. In this way, nothing is irremediable.

There will always be a sector of humanity that continue to invest efforts, creativity and risk taking in denouncing the causes of violence, the mechanisms that cover it and their perpetrators; another, will provide signs, expressions and acts of empathy in their artistic creations or activities freely chosen and freely directed to this cause.

And finally, another one, which, at the same time, taking the task to reflect and formulate any questions and act that transcend reality. The mission, on any front of humanity, is directing our evolution into a fairer and less painful coexistence and look for ways to mitigate the ravages of completed cases despite the state, and neoliberal capital policies, even the same reality.

Again I dedicate my artwork, with deep respect, to the survivors of human atrocities and the human front against them.
I use the term Eviction metaphorically to refer to the expulsion of a human being of his life, which leaves a vacuum that only nonsense can occupy.
Utilizo el término desalojo metafóricamente para referirme a la expulsión de un ser humano de su propia vida, desalojo que deja un vacío que sólo el sinsentido puede ocupar.

Mexico lives in a state of decomposition in which the abuse of power becomes law; law, the shadow of a society that can be trampled and justice, a chimera. In all forms and degrees, murder denies to all the struggles and votes of humanity for a civilized world. Despite all the disappointments with civilization, the continuity of the survivors, the memory and the trembling will to overcome this tragedy is what remains as a painful and dark point of departure, yet as the very condition for a process of regeneration, which is, undoubtedly, active and creative.

El Salvador has for me a profoundly personal significance that goes back to my early youth in the eighties. I was then awaking to an incipient political awareness and, but rather, I was snatched by the sympathy and passion for the Central American social and revolutionary struggles of those years. El Salvador, like Nicaragua, Guatemala and Colombia, was a country whose news on armed conflicts and struggles caused me great impact. In the end, all were defeats when counting the dead, many killed, many civilians dead. This hurt me, and it was not my country. On a larger scale of death, today, in Mexico, people do not die in civil strife, people is killed in civil strife, resisting inhuman values and situations and defending the right to live.

The free market is brutal as it was predicted to be in the early nineties and its dark dimensions are still increasingly devastating most of humanity with unemployment, poverty, and murders and missing. The drug problem is the explosive result of a civilization that makes the exacerbation of desire and addiction Business as part of its economy following its neoliberal market models. Thanatos is the face of modern civilization.

After 30 years of my hopes in the revolutionary armed struggle in Central America, I’m going to El Salvador to meet a destiny of the past with those numbers of dead in my memory, overtaken by those of the dead in Mexico in nearly two presidential government terms. Beyond what we can know, I go to encounter situations left by the past and someone’s conscience about the terrible experience of violence.

Exploration and process, that is the work, do not know what I’ll find.

It is very important for me to return to Colombia where I found deep connections with Mexico: sensitivities and cultural forms to be taken into account when assessing, from any perspective, what is happening in Mexico and other Latin American countries in relation to this type of violence in recent years. Hoping that one day our attention is directed to this region for other reasons.

My intention is to introduce into public spaces of these countries poetic- symbolic behaviour in a harmonious relationship with the flow of the selected sites dynamics, although, paradoxically, the objective is to break the trance of everyday life and the repetitive present. Thus, I seek to shake the layers and dimensions of living, organic, collective memory that each individual embodies in a particular way. Through a free relational negotiation; free to be accepted, rejected, ignored, or to decide getting involved participating in it and / or transforming it. The participation of the people is a sign of the emotional and cultural ties that activates the symbolic action; therein we can find the resources and mechanisms of collective healing process of the individual memory, in its wide diversity and plurality.

Can art denounce something we don’t know or help us psychologically withstand the current horrors?

Selection of documentary films on civil war in Salvador.