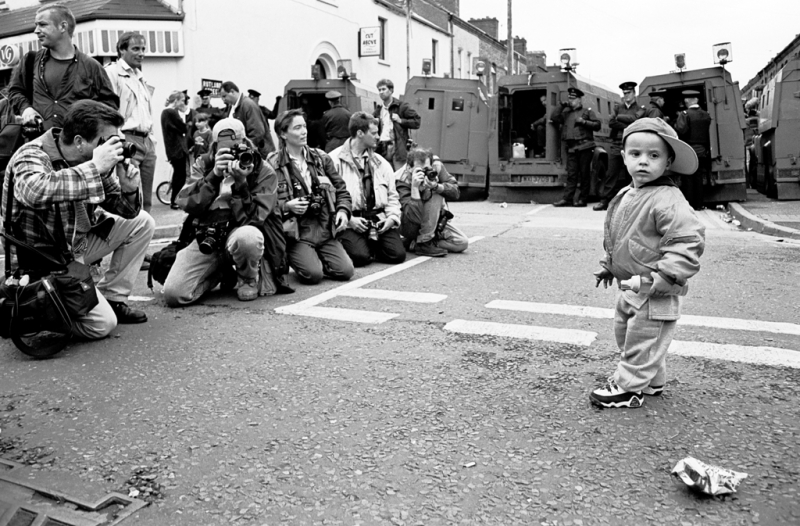 The origin of Belfast Exposed dates back to 1983 when a group of local photographers came up with the idea for an exhibition to which people from across Belfast were invited to bring their photographs, to provide an ‘amateurs insight into the varying images of Belfast’ (Brendan O’Reilly 1984). The response to this idea and to the eventual exhibition itself was so enthusiastic that it was taken not only to different venues within Belfast but was soon sent abroad. ‘It just snowballed from there.’ Following on from the exhibition, those involved found themselves facilitating workshops. Later, after more permanent premises were obtained, a darkroom and a gallery were added.

The gallery space provided exhibition space both for local community groups and established photographers from within and outside of Belfast. Photographs taken by the photographers and by the participants of the workshops started to amass, adding to the corpus of images from which the initial exhibition had been formed and providing the foundation of an archive.

Approaching its twentieth anniversary Belfast Exposed can be said not only to have come of age but also to be alive and well. And while the early success was carried by the enthusiasm of the individuals involved, it now possesses a sound organisational base staffed by a new generation of full-time workers and enjoys more secure long-term funding than probably ever before. Like similar groups the activities of Belfast Exposed are diverse, encapsulating a variety of emphases that reflect the personal interests of the people involved, the needs of the local communities with which they work and the practical restrains of financial prudence.

One major aspect of its activities is still the provision of workshops for local community groups. The groups themselves have become more knowledgeable about their own requirements and workshops themselves have to be more focused and accommodating to these demands, providing more than just basic photographic skills. One full-time tutor, plus a handful of part-timers are looking after this side of the group’s activities. Most of the groups will have to use the darkroom facilities of Belfast Exposed.

The gallery now hosts about four photographic exhibitions a year. The gallery also shows the work of photographers supported through a bursary scheme. The archive has grown to include around half a million photographs. About one percent of this photographic wealth is currently being digitised and preparations are underway to make these available online.

Belfast Exposed’s relatively late birth, at a time when many other community photography projects started to run aground or to simply peter out, is already an indication that there are some special factors involved. The initial idea, to provide an alternative and ‘amateur view’ of life in Belfast, was not merely an attempt to provide a forum for ‘ordinary’ people, whose access to means of visual expression would have been severely limited. This was additionally done within the context of the violent confrontations that have characterised much of the life in Northern Ireland for over one generation.

One of the initial organisers recalls: ‘we were also conscious of the amount of censorship that was going on in the media portrayal of events happening here, that people weren’t given enough information’. The aim of Belfast Exposed was therefore twofold: on the one hand, it wanted to show the full extent of life taking place beyond the images provided by the mainstream media and on the other to document the Troubles themselves to a fuller extent. Initially, while conceived as a broad project, it was closely linked with predominantly Nationalist West Belfast.

The first exhibition was housed in the Conway Mills, which was intended to be turned into a permanent centre of cultural activity, well beyond still photography, the subsequent move to a more neutral location signalled a conscious effort to become as inclusive as possible. (The organisation has been housed in King Street for the past decade.) The early closer relationship of Belfast Exposed to West Belfast was a reflection of the background of the people involved in initiating the project. The images in the archive still reflect a slight imbalance of which the people to whom I spoke were keenly aware. They also point out the difficulties and resentment that the volunteer photographers encountered while taking pictures in Loyalist areas.

These problems point to an inherent difficulty of the Belfast Exposed project which is defined by a local identifier (Greater Belfast) that is, on a practical level, made up of a plethora of smaller, often mutually exclusive communities. The photographer is just as much an outsider if he comes from across town as if he jets in form across an ocean. The photographers were also mainly male, a bias that those involved in Belfast Exposed were conscious of from the start and that has only changed over the last couple of years. (These issues seem to apply primarily to the photographers that were associated with the organisation, but not to participants of the workshops.)

Looking through the images of the digitised archive two distinct categories of work are identifiable. First there are the photos taken by the volunteer photographers (and, in recent years, by recipients of the bursary) and then there are those taken by the participants of workshops. The latter group has engaged in street photography that seems primarily to involve a lot of children, drunks and animals. Alternatively they focus on their peers, as a means of honing their technique. There are exceptions, workshops that organise themselves around themes or the pictures by older workshop participants who seem to engage more with their built environment than with clowning peers. These pictures are attempts by the participants of the workshops to present themselves to the people around them.

‘This is us to the outside world.’ The photographs by the photographers tend to focus on public events, moments in the political struggles. There are riots, demonstrations, cultural festivals, party rallies and too many funerals. One can see individual politicians mature from scraggy-bearded young men to seasoned politicians. Gerry Adams dominates the category of public figures and it is easy to see his visual metamorphoses something already part of the political folklore.

I was at a loss to identify how these pictures differ from the work of other photo-journalists. Everyone was at pains to point out their status as amateurs, but I found it difficult not to see them at least as semi-professionals. Amateur status is merely a mark of distinction that in practice becomes relatively meaningless. As Sean McKernan pointed out he too had become a ‘coffin chaser’, ready to pack his camera and go out, as soon as he heard an explosion go off. And several of the individual photographers were free-lance suppliers of photographs to newspapers.

The ‘amateur’ label seems to be a marker of authenticity, which allows the photographer to identify himself more closely with ‘”visually articulate” bricklayers, painters and those on the dole’ (Belfast Exposed Photographic Magazine, 1984). This ideal dominates Belfast Exposed to this day. The paid work of covering cheque-presentations, prize days or formals was more than once described as a tedious but necessary activity. The greatest benefit of this activity was clearly that it provides Belfast Exposed with a source of revenue that other community arts groups tend not to have. Underneath I detected an unconscious feeling that these assignments were not seen within the realm of community photography, despite the fact that they documented aspects of community life.

Unfortunately, this corresponds with the one weakness that I perceive in the digitised version of the archive: it is lacking the private photographs that people have brought in as part of community group projects and exhibitions and that have been copied and kept. The reason that they are not represented is certainly influenced by questions of copyright. However this absence emphasises the exclusively documentary character of the archive.

This seems to suggest an inherent belief in the explanatory power of the image, as it was initially expressed when Belfast Exposed came into being. ‘The camera is an extremely powerful medium of communication, a means of commenting without having to utter a single word.’ It is not. The image can evoke emotion, but it needs other forms of communication to convey meaning and to explain. When one speaks to anyone about a particular picture stories just seem to flow, but these stories are not included in the archive. It is in this respect that Belfast Exposed differs significantly from other community photography groups.

Unlike these the main emphasis of Belfast Exposed is not in the questioning of the mechanism of visual representation, a deconstruction or subversion, but in the documentation of the social world within established photographic norms. On a local level this might be different in the exhibitions that are organised by community groups or as part of a workshop. Here different forms of visual display seem to be experimented with, but these do not find themselves reflected in the archive itself.

Courtesy of the Belfast Exposed archive

Those that were involved are forthcoming with the acknowledgement that interest abroad was greatly stimulated by the Troubles and that a community arts group from Cardiff or Birmingham would have not been received with as much curiosity. It should also be noted that the slightly later arrival ofBelfast Exposed meant that the years of large-scale cuts in arts and community funding could be weathered through the enthusiasm of those that initiated the project and that in recent years many social and culture projects have benefited from ‘peace money’ in one form or another.

So where is Belfast Exposed now? Looking back at the 20 years of photography in the archive it is noticeable that only a small part of the city is represented there. The approach of the photographers is also uniform in its adherence to a classic social documentary style.

Today Belfast Exposed’s object, the city itself, is no longer dominated by an exclusively bipartisan Troubles narrative. Finally the staffing of Belfast Exposed has changed allowing a reorientation of the organisation’s objectives and a reappraisal of its motives. The combination of these factors places a strong Belfast Exposed in the enviable position of being able to create an even more diverse stylistic and thematic portrait of Belfast and discover a future role for community photography in the city.

The author would like to thank Karen Downey, Sean McKernan, Pauline Hadaway and Mervyn Smyth for their assistance in producing this article.

You just roll it out and everything is perfect, right?

To Open or Not to Open? A technical, legal, or philosophical question

by The Digital Museum
Scroll up